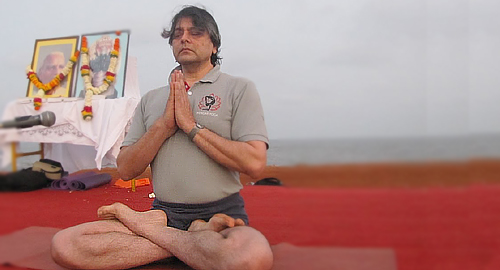 We are delighted to announce that we will be hosting two livestream classes with Birjoo Mehta. Please note that these classes can only be booked by IYMV Members. Membership is available from £10 here >

Birjoo Mehta started learning yoga with Guruji in 1974 in Mumbai and began assisting Guruji in the Mumbai classes in 1981. He accompanied Guruji as an assistant  in many of his multi national tours and conventions in the US, Europe and UK  in 1984, 1987, 1990 and 1993. He also traveled with Guruji to Australia, New Zealand, Japan and Korea in 1992 and to China in 2011 as well as assisting in many of his tours in India. Birjoo teaches regular classes in Mumbai for the Light on Yoga Research Trust where he has been a trustee since 1987 and continues to take classes at RIMYI.

SInce 1999 Birjoo has led many conventions in the US, Canada, France, Spain, Germany, Ireland,The Netherlands, Belgium, Poland, Switzerland, Germany, Austria, Russia, South Africa, Israel, and SouthEast Asia and China. He also led the UK  conventions in Manchester, Exeter and Newcastle. The first yoga class he ever taught was at Maida Vale in 1984 under Guruji’s guidance.