Gyaan Lyon is an aspiring tenor and has congenital right-sided hemiplegia, a form of cerebral palsy. He explains how Iyengar yoga helps him maintain health and stability.

I have congenital right-sided hemiplegia, a form of cerebral palsy. Specifically, my right hand and foot are completely paralysed with limited movement in my right shoulder, arm and leg. 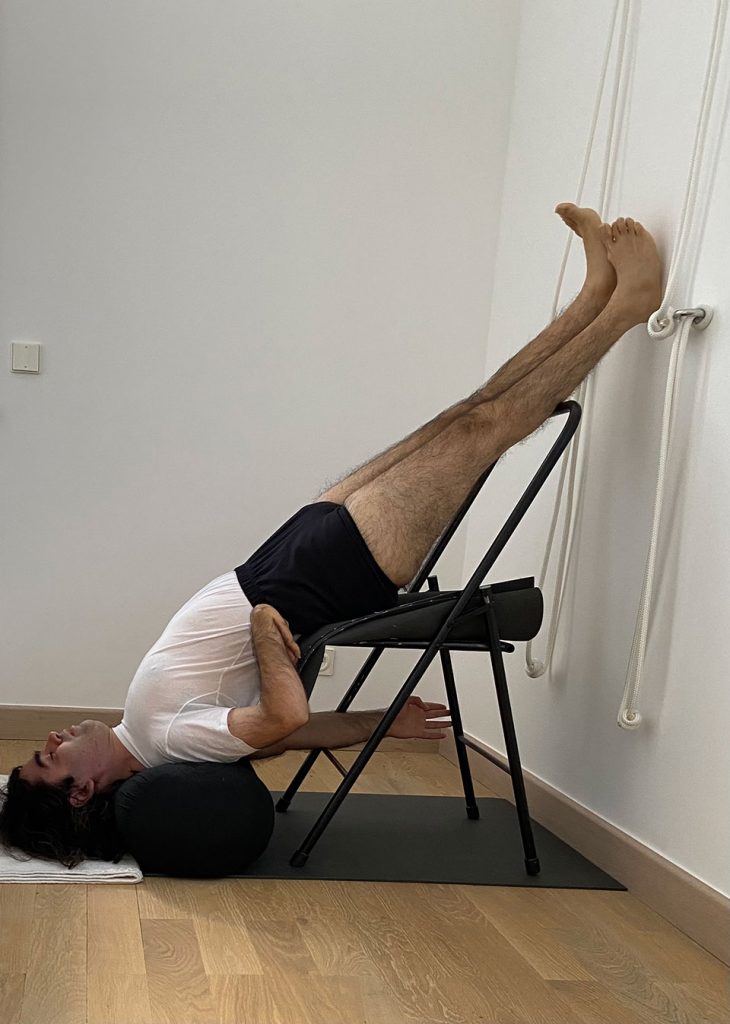 Coping with pain from neuromuscular spasticity is one of the most debilitating facets of my disability in daily life. Various physiotherapy treatments since childhood have been ineffective and very painful with little relief.

In February 2012, the spasticity and resulting pain became so acute whilst I was completing university coursework in London that it felt as if each and every cell on the right side of my body was being strangled from the inside. A previous year of repetitive right ankle sprain injuries sustained from walking barefooted at home made matters worse.

Through a chain of events, I began attending Hatha yoga classes in a local gym around that time. Noticing the relief it brought from doing a few asanas to the best of my limited abilities, I began practicing during the Christmas break with my mother, who has been practicing Iyengar yoga since 2003. Gradually, she introduced me to the Iyengar method. I quickly became attracted to the precision in the instructions and the focus on alignment within the asanas as well as the use of props which brought greater alleviation from spasticity.

The practice wasn’t easy. With poor balance, accumulated muscle tightness and poor spatial awareness, even learning to centre myself on a mat was challenging due to my right eye hemianopia. We were fortunate to enlist the help of one of my mother’s teachers, Annie Ciekanski, who greatly broadened the range of supported asanas we explored. Annie, who spent over two decades assisting medical and general classes in Pune, also got me up into chair Salamba Sarvangasana much to our amazement.

By April 2013, I began attending Beginners classes on a regular basis at IYMV. During occasional attendance at the remedial classes Korinna Pilafidis-Williams and Judy Smith established a core of essential props to allow me to independently follow regular Beginners classes with maximum asana alignment and minimal class disruption. This has not been straightforward, but has instead evolved with my practice over time. 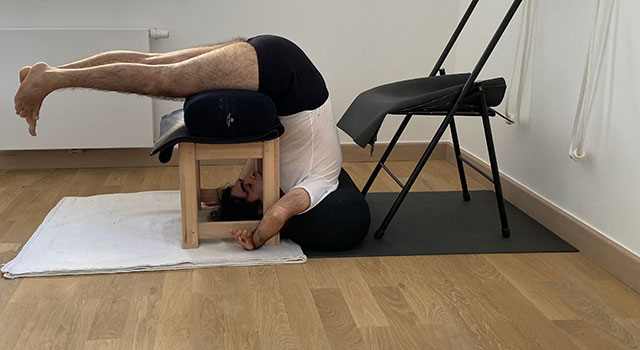 Cumulative suggestions from various teachers during regular classes at IYMV and daily practice at home or in class since October 2013 have sped the process along while also deepening my understanding of asana alignment and sequencing. It has been very rewarding to practice independently in class despite my limitations and to be able to follow 85-95% of asana sequences over a short period of time with the appropriate props. I have also learnt many alternative supported asanas to perform when I am unable to follow the class.

A medical class with Geetaji:

Amongst the spectrum of modified asanas I practice, some favourites stand out. To independently do chair Salamba Sarvangasana and recently, thanks to Penny Chaplin, stool Ardha Halasana are two asanas that I didn’t expect I would ever be able to do on my own for many years.  Rope Salamba Sirsasana was also an asana that I never expected to ever experience. But Annie found a way for me to do it with assistance in my first Iyengar yoga retreat with her in France in August 2014; and since then, I have been able to periodically practice this asana with help at IYMV.

My motivations for continuing the practice are diverse: relief from spasticity, better posture, increasing energy, strength and stamina, calmness and improving body awareness are all major incentives. My foot is also becoming less retracted and flatter, which is allowing my orthotist to experiment with making lighter and less voluminous ankle-foot orthoses.

I firmly believe that my commitment to daily practice, regular class attendance and several blocks of Tomatis Audio Psycho-Phonology therapy over the last few years are the driving forces behind the rapid progress I am making in the various supported asanas I do. Having done blocks of Tomatis therapy as a child in France to remedy many learning difficulties I had in school and in recent times to help with vocal training, I’m convinced that it has also contributed to improving my yoga practice. It was during the course of a Tomatis block in October 2013 that I did my first autonomous chair Salamba Sarvangasana at IYMV, which in turn was a key motivation for starting my daily practice. Senior teacher John Schumacher explains that doing one asana a day is a good way to start one’s own practice.

These three quotes from Yogacharya  B K S Iyengar  have become guidelines for my daily practice:

This was a recommendation B K S Iyengar  gave to Senior teacher Garth McLean, who has multiple sclerosis.

A quote recounted by a senior teacher.

In sum, my Iyengar yoga practice is now firmly part of my lifelong quest for health, stability and personal growth.

Find out more about the Remedial Classes at Maida Vale >