Dr. Geeta Iyengar passed away on Sunday 16th December at age 74. She made a profound contribution to  the yoga community around the world with her dedication to sharing the teachings of her father and guru, BKS Iyengar. Her seminal work ‘Yoga – A Gem for Women’ has had an enduring influence on yoga techniques for women. Reportedly when asked about living in her father’s shadow she replied, “It was not his shadow, it was his light.”

In 1999 Mark Tully, the BBC’s India Correspondent from 1964-1994, visited Pune. The result of this visit was a memorable interview with BKS Iyengar for the BBC Radio 4 production: Head to Toe. BBC producer, Vanessa Harrison, has kindly shared the interview transcripts. This is a section of the interview Mark held with  Geeta. 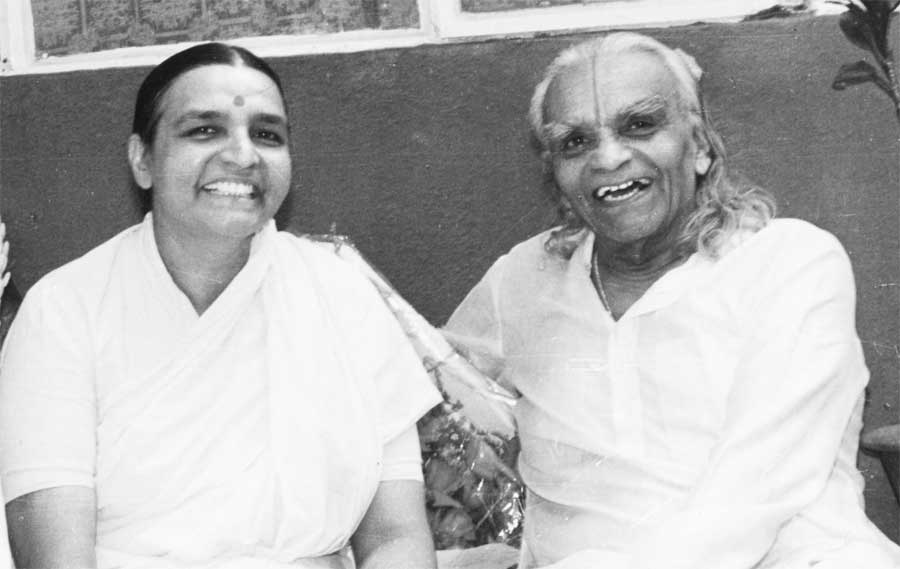 Geeta, could you tell me first of all about your childhood. Was your father a very strict father because when I see him teaching, he seems to be a very strict teacher?

Geeta Iyengar: Yes, he’s a great disciplinarian. Strictness, discipline is what he demands. From childhood he wanted us to have the discipline. I won’t say he’s strict just for the sake of strictness, but certain things he values in life, so that part he wanted us to know and that’s why he was a disciplinarian. Not in the sense that strict means, just what he wished we would do. He knows that he’s going to do good to us. Let us say there was some music, culture but he never wanted us to waste our time unnecessarily somewhere else. He used to tell us what we should do, always something constructively. So I won’t call him a very strict father, but disciplinarian and that is still there.

I can see that, yes. How many were there in the family?

Geeta Iyengar: We are five sisters and one brother, six altogether. 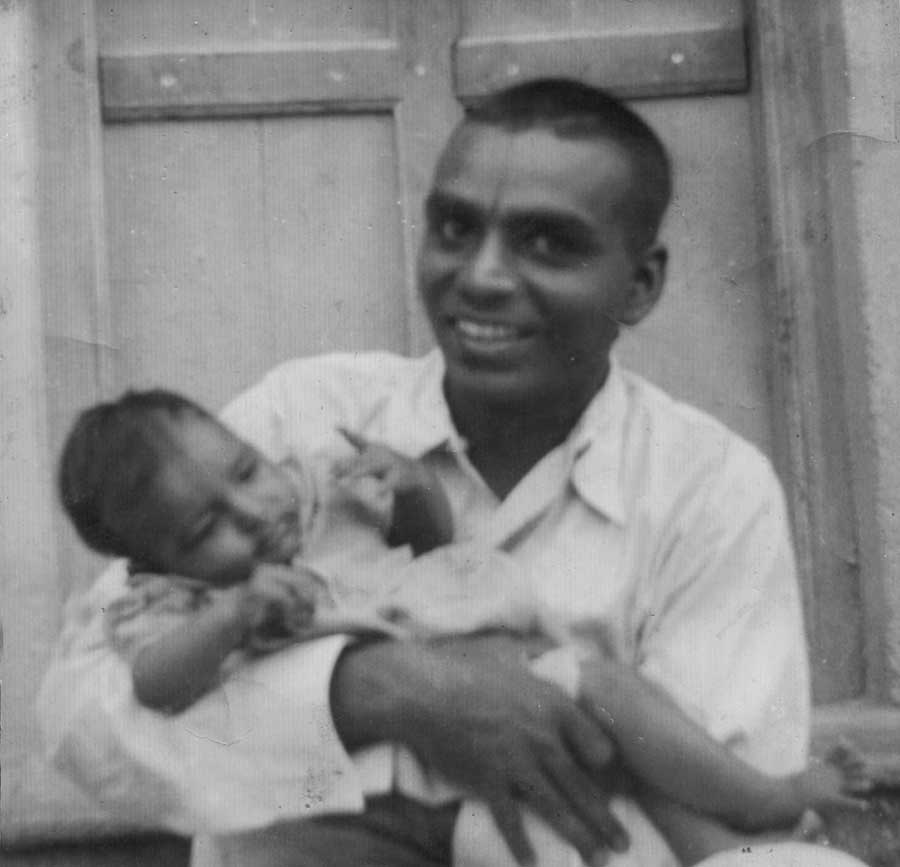 Now how did it happen that you and Prashant were the two that took to and the others have not taken to yoga? Only you and your brother Prashant have taken to yoga to become yoga teachers, a charya or charyan (charya in Sanskrit means following, going after). Why did the others not want to do this?

Geeta Iyengar: Well, let me explain this. There were six in our family. I was interested in yoga from childhood, I was seeing my father doing every time and I also felt like doing, that’s why my mind was there, though perhaps physically I did not put that much effort in it but still I had a liking towards it. And from childhood I had sort of decided that I’m going to do yoga and in the mind there was a strong feeling that I should take to yoga. As far as my brother is concerned, he started doing it much, much later. First he was playing violin and then when he left playing violin, he took to yoga. Now, another of my sisters (Sunita, ed.), she’s also teaching these days. 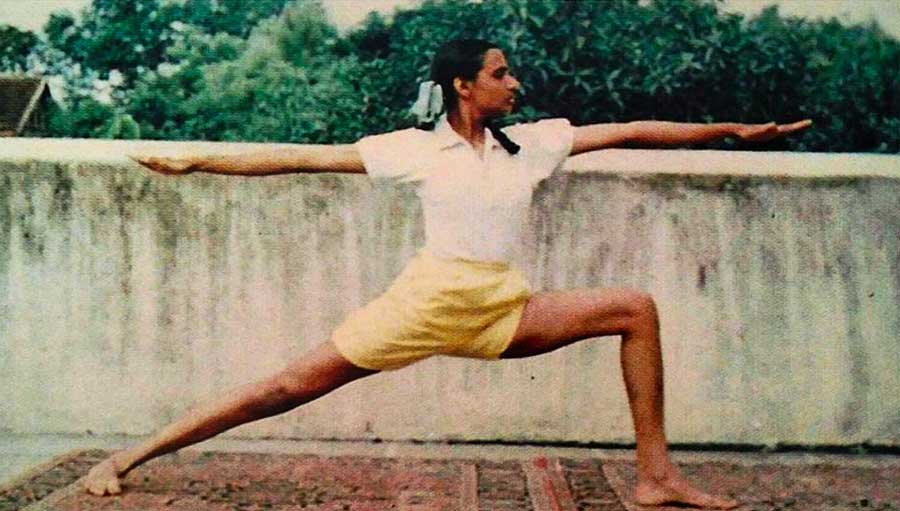 Geeta Iyengar: She picked it up much, much later, after getting married and she is also teaching. I won’t say that the others did not pick it up as such. They know a little bit about it, but still I feel, as far as yoga is concerned, it has to come from inside. One has to have the feeling from inside to do it. By looking at the atmosphere in our house, we were always having this yogic background all the time. All of us picked it up a bit, that is a fact, but still from inside, what one has to feel, I think perhaps from childhood I had that.

You felt this strongly?

Geeta Iyengar: I felt very strongly that I must take to yoga.

Now did you have a formal education as well?

Geeta Iyengar: Yes, I graduated in philosophy and also I have done Ayurveda so I am a doctor of Ayurveda. This I did later, first I did my arts BA.

And have you ever had any other, if I could use the word, profession than yoga teaching?

Geeta Iyengar: Well, Sir, I don’t think so. From the very beginning, I was all the time for this. Believe me, I haven’t gone out of this circle anywhere, even if I have to read something, I just go to open a yoga book only, not even a story book or any novel. From a very young age, it’s a fact, except my school studies, where I had to study textbooks in college, but not otherwise. I think often I read about yoga only. 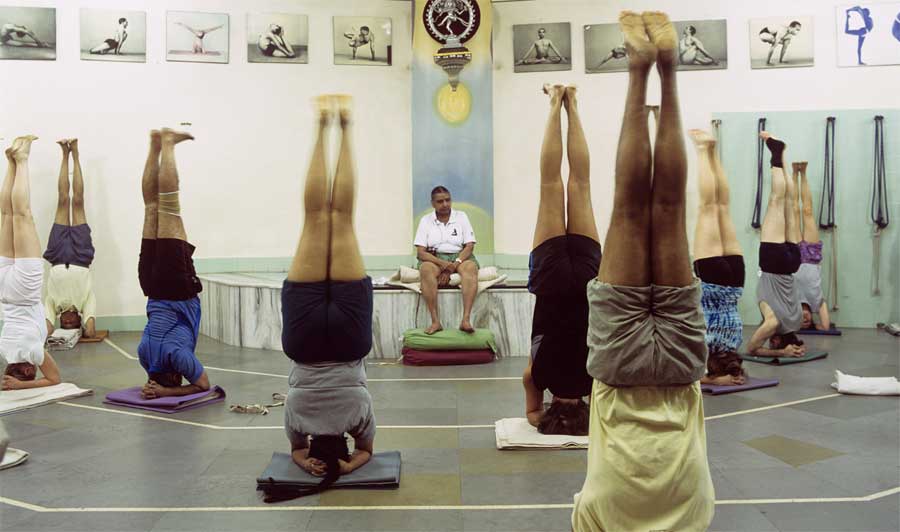 Geeta Iyengar: I can’t say about the family, but I have got a strong feeling it’s not necessary that the family has to carry in this manner. There will definitely be students who will not only be interested, but they will take to yoga. So a generation will be there which will take up this art and further it. 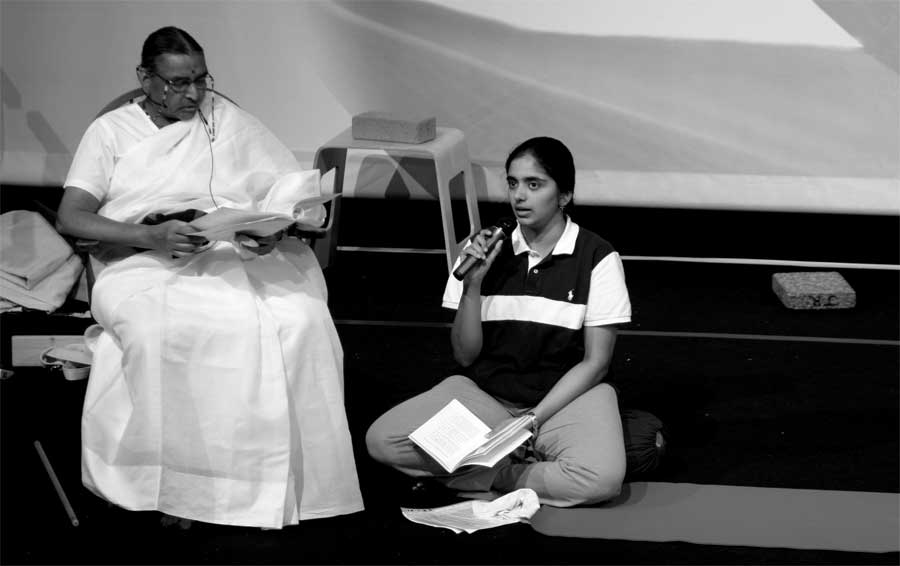 Geeta Iyengar with her niece Abhijata

But although you’re not concerned as to whether the yoga institute is run by a member of your family or not, what about your children and the children of the other members of your family. Because you’re a very close family, are they interested in yoga?

Geeta Iyengar: We are a close family, but they are not showing any keen interest as such; but my niece, my sister’s daughter (Abhijata who currently teaches at RIMYI, ed.), she has got this knack of helping and teaching while doing yoga. When she comes here during holidays, she practises with me and when I ask her to help, she has got this knack which I have found and often I keep on telling her that you should develop this so that you can be a good yoga teacher. If she takes it up, I think it would be wonderful. As far as the boys are concerned, I think they are so young, we cannot decide at this age what they should do, because boys always have a different attitude than girls, I feel. They have got so many things in front of them, so first the interest goes on those, especially computers these days. But perhaps they may turn later in their later life, then they feel like coming to this, because this is something going to be permanent.

Read interview with Geeta Iyengar on yoga for women >