We sell books by the Iyengar family, yoga DVDs and equipment for your practice at Maida Vale. Visit us at 223a Randolph Avenue, Maida Vale, London W9 1NL.

Books and DVDs can also be mail-ordered from reception, but we are unable to send equipment by post.

The definitive work by B.K.S. Iyengar, the world’s most respected yoga teacher.

B.K.S. Iyengar has devoted his life to the practice and study of yoga. It was B.K.S. Iyengar’s unique teaching style, bringing precision and clarity to the practice, as well as a mindset of ‘yoga for all’, which has made it into the worldwide phenomenon it is today.

‘Light on Yoga’ is widely called ‘the bible of yoga’ and has served as the source book for generations of yoga students around the world. It is the classic text for all serious students of yoga.

• B.K.S. Iyengar’s own photo-illustrated, step-by-step guides to every yoga routine. • Week-by-week development plan – with a total of 300 weeks to allow gradual progression from novice to advanced technique.
• B.K.S. Iyengar’s unique and inspired guide to Pranayama – yoga breathing techniques. • B.K.S. Iyengar’s yoga philosophy for life and an introduction to the spiritual aspects of yoga.
• Yoga sequences and asanas to help heal a range of specific illnesses and conditions.

One of Time magazine’s 100 Most Influential People in the World.

‘The Michelangelo of yoga’ – BBC 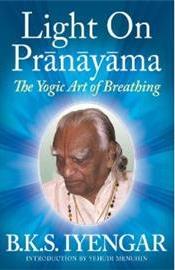 In this classic, B.K.S. Iyengar describes the practice of breathing, together with a comprehensive background of yoga philosophy. Part one presents the theory, art and techniques of Pranayama. Part two offers insights into meditation and relaxation.

This authoritative and practical book is an indispensible guide for beginners and experienced yoga teachers alike.

With an introduction by Yehudi Menuhin. 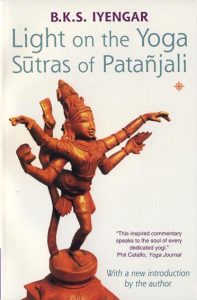 Light on the Yoga Sutras of Patanjali (B.K.S. Iyengar) £13

with a new introduction by the author

Written over 2,000 years ago, the Yoga Sutras of Patanjali are among the earliest of ancient teachings.

Here, B.K.S. Iyengar provides a translation along with commentary and explanation for the modern reader. The Sutras show how we can transform our mind, body and emotions through practising yoga so that we may evolve spiritually. This book provides a remarkable introduction to the philosophy of the Sutras that are the base of yoga practice.

‘There are not many practical arts, sciences, and visions of human perfection of body, mind and soul which have been in practice over so long a period without attachment to a particular religious creed or catechism. Anyone can practise yoga, and this important contribution to the history of yoga and its validity today is for everyone’.

Thorsons, an imprint of Harper Collins, 2002. 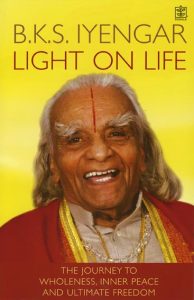 The Journey to Wholeness, Inner Peace and Ultimate Freedom

‘Here, B.K.S Iyengar, founder of the style of yoga teaching known as Iyengar yoga, invites both those new to yoga and those who are experienced practitioners on an inward journey designed to increase theirphysical stability, emotional vitality, mental clarity, intellectual wisdom and spiritual bliss’. 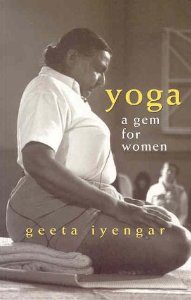 Yoga: a gem for women presents a detailed, practical guide to the yoga student who wants to go deeper with her practice of Hatha Yoga. It is divided into three sections that create an integrated path of yoga suitable for both the beginner and the advanced student:

Experience – On the threshold of peace Relaxation, breathing and the practice of meditation

A Preliminary Course of asanas and pranayama – based on the syllabus taught at the Ramamani Iyengar Memorial Yoga Institute.

The latest work from B.K.S. Iyengar, the world’s most respected yoga teacher.

Foreword from His Holiness the Dalai Lama.

B.K.S. Iyengar has devoted his life to the practice and study of yoga. It was B.K.S. Iyengar’s unique teaching style, bringing precision and clarity to the practice, as well as a mindset of ‘yoga for all’, which has made it into a worldwide phenomenon.

His seminal book, ‘Light on Yoga’, is widely called ‘the bible of yoga’ and has served as the source book for generations of yoga students around the world. In ‘Core of the Yoga Sutras’, he applies this same clarity to the philosophical core of yoga–the Yoga Sutras of Patanjali.

The Yoga Sutras of Patanjali are 196 aphorisms forming the foundational text of yoga philosophy. Each sutra is short and to the point – each being only a line or two long. B.K.S. Iyengar has translated each one, providing an insightful commentary and explanation for modern readers, as well as linking the various themes throughout the sutras to one another.

Each sutra is presented as Sanskrit text, transliteration and English translation, followed by B.K.S. Iyengar’s unique commentary and authority only he can bring to the work.

B.K.S. Iyengar’s insight on the sutras show the reader how we can transform ourselves through the practice of yoga, gradually developing the mind, body and emotions, so we can become spiritually evolved. This is a wonderful introduction to the spiritual philosophy that is the foundation of yoga practice.

Partly filmed in black and white, and partly in early colour, this is a classic silent composite of rare footage of B.K.S. Iyengar in his prime, effortlessly practising many advanced postures. It also features Sri T. Krishnamacharya, Iyengar’s own teacher, demonstrating asana and pranayama techniques.

A rare opportunity to learn from B.K.S. Iyengar at first hand, and in great detail. The principal standing and inverted postures are covered, with B.K.S. Iyengar demonstrating the poses and instructing and correcting the students. He also answers questions of general interest. 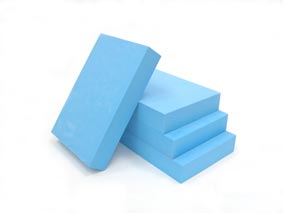