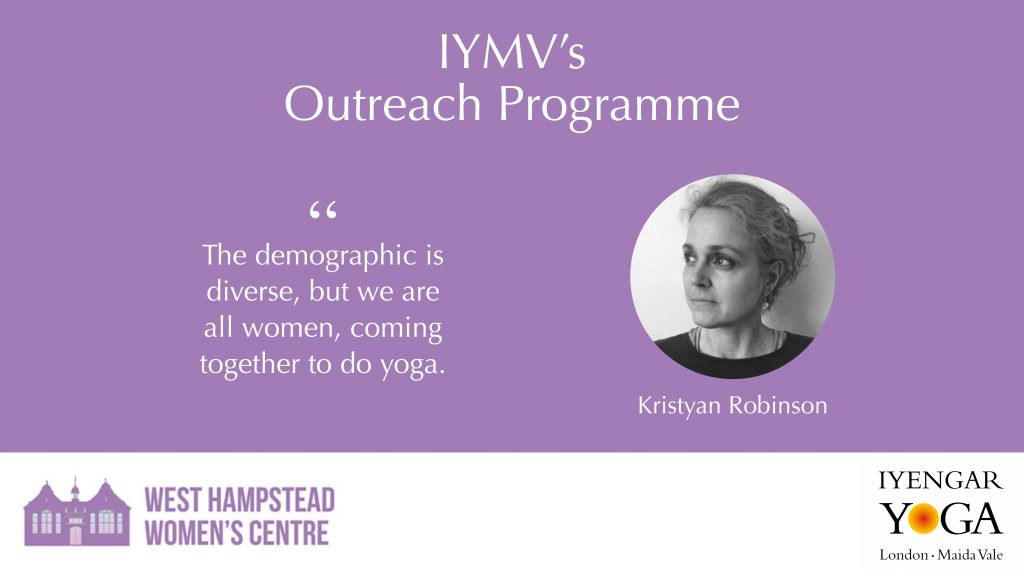 One of Iyengar Yoga Maida Vale’s objectives is to make yoga as accessible as possible to people in our local area. In 2017, IYMV launched an outreach programme to help subsidise Iyengar yoga classes for vulnerable and disadvantaged adults. Iyengar yoga teachers were invited to apply for a six month grant to help run classes in the community providing access to people who may not otherwise be able to attend classes.

Kristyan Robinson qualified as an Iyengar teacher after doing teacher training with Steve Richardson and Sallie Sullivan at IYMV and was one of the first teachers to run a class on the scheme. The classes are now in their sixth year. As soon as the lockdown happened in March, Kristyan moved the class online. With the help of the Women’s Centre, women were taught how to access the livestream classes which have continued weekly.

Many of the women have been attending since the beginning. Apart from the benefits of yoga, they have benefitted from the yoga friendships they have formed. For those who live alone, or with particular hardship that is exacerbated by the pandemic, the short chats at the beginning and end of the class are a meaningful reprieve from the isolation of the time. The demographic of the class is diverse, but as Kristyan says, we are all women, coming together to do yoga.

Below is an interview with Kristyan from 2017 after she began teaching at the West Hampstead Women’s centre.

Why did you choose to teach at the West Hampstead Women’s Centre?

I have lived in West Hampstead for nearly 25 years. I knew the West Hampstead Women’s Centre when it was in its former home on Hemstal Road. I had sought advice from the Centre at that time. Some years ago it relocated to a beautiful Victorian building on Cotleigh Road that used to be a small library. I knew the library and the street very well.

What has been the biggest challenge of teaching there?

Teaching the students at the Women’s Centre was a real change from teaching my peers during our Friday afternoon practice sessions at Maida Vale. These were women who had little or no yoga experience. Some had not done any form of exercise for many years. It was a long way down to the toes, both physically if the hamstrings were tight, and mentally if the awareness was not yet there. For experienced practitioners, the joining of the inner edges of the feet in Tadasana, connecting the right side of the body to the left in a reasonable semblance of symmetry, is something we take for granted.

To teach a new student Tadasana for the first time often involves inviting them not merely to feel if the inner edges of the feet are joined, because they won’t be, but to look at their feet and even to bend the knees and physically join them.  And that was just Tadasana. The first time I taught Adho Mukha Savasana I gulped silently. I didn’t know where to start! I had never seen primordial poses like these before. I remembered Sallie and Stephen’s words: ‘start with the base’.  Get the hands and feet right and then build upwards.  Now, three years on, the students’ poses are much stronger and I instruct in a more refining way.  This is a great privilege as a teacher – to witness the commitment of the students and consequent improvement in the postures.

The students are committed and there is a solid core who have rarely missed a class in three years. Their improvement, and the health and wellbeing benefits they derive from the practice, motivate them.  The class became popular and so the Centre raised funds to purchase equipment to add to the mats and few blocks already there when I took over. We now have bolsters, belts, blocks, blankets and bricks.  After about 18 months of running the class several new students joined. They were complete beginners and it was difficult to teach such a broad mixed level class and to accommodate all the students in the room.  I didn’t want to turn people away and so we started a new class from 11.15-12noon for complete beginners.  Here we work on the core foundation; alignment of the feet, preliminary standing poses and arm extensions from the Introductory Level 1 syllabus like Ardha Uttanasana at the wall. This is less intimidating for those completely new to both the poses and the language of yoga. We take it slow and the experience of making real progress keeps the students coming back.

What have you learned from your experience?

I am very proud to be offering my skills as a yoga teacher to women. I am giving back to a Centre that helped and supported me many years ago. While I don’t know all the stories of my students I do know that the Centre supports those who are survivors of domestic violence, those who are socially excluded as a result of not speaking English as a first language, those with mental health issues, those in poverty, those who struggle with literacy and therefore cannot complete benefits forms and refugees traumatised by war.   Some women simply come to the Centre to meet others and to join in the many varied activities on offer.  These are women with their myriad of women’s stories.  While I don’t know the details, I know that the stories are etched on the body.  I remember who has a sore shoulder, who has damaged their hamstring and has high blood pressure, and who has arthritis in the knee. I modify their poses accordingly.