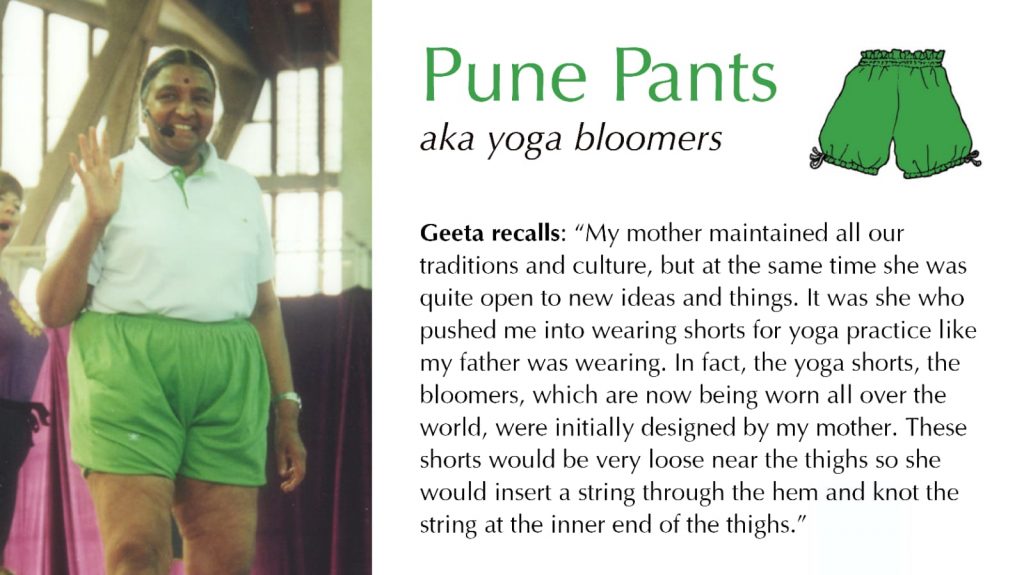 Scorned by some, loved by many, Pune shorts are a familiar sight in Iyengar Yoga studios all over the world. Perhaps the closest thing we have to an unofficial uniform, wearing them in public requires more letting go of the ego than many students are prepared to suffer. But where did they come from and why do we (some of us) wear them?

Where did they come from?

Traditionally, men in India wore the dhoti (a fabric wrap around the waist and legs) for yoga. The few women who practised wore the nine-yard sari. Both could be complex to wrap and bulky to wear. When Western women began to come to India in the 1960s, they wore stretch pants and t-shirts. Guruji brought two pairs of stretch trousers back from Europe for Geeta, but these were not generally available to Indian women who continued to wear traditional garments such as long skirts, blouses with buttons up the front or the shalwar kameez. Some even borrowed trousers from male relatives. According to Geeta, what Indian women wore for yoga remained a considerable problem.

It was Geeta’s mother, Ramamani Iyengar, who first encouraged Geeta to wear shorts.  Ramamani was one of Guruji’s earliest students and, before their family grew, also taught yoga to women. The move to shorts for women was somewhat of a radical break from the yoga tradition in India, and is a testament to Ramamani’s broadmindedness and practical character.

Geeta recalls: “My mother maintained all our traditions and culture, but at the same time she was quite open to new ideas and things. It was she who pushed me into wearing shorts for yoga practice like my father was wearing. In fact, the yoga shorts, the bloomers, which are now being worn all over the world, were initially designed by my mother. These shorts would be very loose near the thighs so she would insert a string through the hem and knot the string at the inner end of the thighs.”

Freedom: Unlike modern, body- sculpting fabrics (designed to grip and constrict), Pune pants permit a complete range of rotation and extension in the legs and pelvis. The lower limbs, buttocks, sacrum and tailbone can all move freely. It might be said that the shorts fulfil one of the key commandments or Yamas of yoga – Ahimsa (non-violence). Put simply, they are kind to our bodies.

Understanding: Wearing shorts can allow poses to be better understood and executed. Students are more able to feel and control what they are doing in a pose and teachers are more able to see what is happening.

Comfort: Pune pants allow the skin to breathe. Wonderfully cool in hot climates, they can be a necessity in Pune and sometimes a relief even in Maida Vale.

Better poses: If standing postures can improve in shorts, seated poses suchas Baddha Konasana and Padmasana can also benefit: the skin, muscles and bones of the legs gain the freedom and sensitivity necessary to rotate and release in different directions. Skin contact is also helpful in many poses. Vrksasana (tree pose) is the obvious example, where bringing the sole of the foot to the skin of the thigh prevents the foot slipping, but all standing and seated twists as well as wrist balances improve in shorts because the arms and legs can come into contact with more intelligence.

Modesty: An important consideration now, as in 20th century India. With elasticated cuffs at the waist and thighs, Pune shorts don’t gape, tear or get stuck.

Geetaji continued to wear Pune pants, favouring shades of green. Worn by both men and women, the bloomers are a modest icon of equality and of the emancipation of the body in the pursuit of freedom and knowledge.

This article was written by Alice Chadwick and published in the 2020 issue of Dipika, the IYMV Journal.